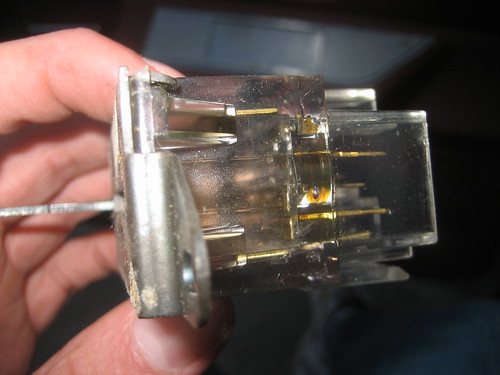 The one thing I'm most dissatisfied with in my car is the windshield cleaning parts. The wipers have an interval switch, but no setting for wiper speed between "every once in a while" and "short delay" seems to make a difference, it seems to stay at "every once in a while" for most of the switch positions with an exponential ramp-up to "short delay". (The other problem I have is the washer fluid supply tubes getting clogged, I probably need to replace them outright.)

The switch is even simpler than I thought it would be, and instead of having a traditional potentiometer, it seems to use these long, sliding contacts to give variable voltages to the brains in the wiper motor.

I guess my next step in this will be to pull apart the wiper motor and figure out if there are brains inside it that trigger the interval behavior, then trace those leads back to the switch. I didn't count, but there are eight or ten wires running into the switch, too many to be mentioned in the wiring diagrams I have.