First there was bacon cake.

Next, the bacon mat.

I got my shoulder x-rayed on Wednesday, and on Thursday I found I could get a copy of them on CD for just $15! 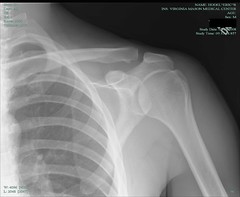 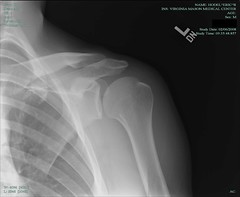 Turns out there's nothing wrong with the bones of my shoulder, but I've got AC joint inflammation and left pectoralis major and minor strain. I was given some exercises to do, and the puny amount of resistance they're giving is working things just right.

On Monday I tried to buy my airplane tickets to Australia, and Orbitz screwed up. They left pending charges for me twice on my credit card, and it took until today to get them to remove them.

Now that I've tried to book the flights for real with United, it seems that I already have a reservation for the entire trip and two extra flights from Sydney to Melbourne. At least I'm not getting charged for them.

At the McLeod Holiday Party I gift-exchanged a mug and cocoa for a gross of bottle rockets. Tonight would be an excellent night to use them, but that's too many bottle rockets for me alone.

This is where you come in, I'll gladly exchange bottle rockets for assistance in using them.

I tried to give platelets on Sunday, but failed. One arm started to bruise, so they switched, and the second arm did the same, so we gave up. In the time I donated I got to watch my cousin (who plays football for Arizona) make a snap that was a bit too high for the kicker, who then got sacked for a safety. I think it's ok overall though, since it isn't like he threw an interception for a Seattle touchdown.

Just now I received an email from the blood center saying I was at a 1403 mL red cell loss, which seems like a lot. I don't feel like I lost nearly three donations worth of blood, so I hope it means something else.

Oh, and I saw Crutches (the one legged homeless guy) while walking to the blood center, so he's still alive.

You can tell this by my choice of dinner after biting my tongue at jujutsu practice last night, tortilla chips with hot salsa and basque chorizo sausage. I realized that this was a bad combination of foods before I started eating, and continued anyways. I believe the first several bites had expletives mixed in between. Genius indeed.

In other news, today at 11AM (ish) I was supposed to get my replacement washing machine since my previous one lit on fire two weeks ago and the repair guy never came to look at it.

I went to jujutsu practice today for the first time in two months, which was fun. It was just long enough that my out-of-shape body could handle it.

Upon returning I threw a towel, my judo jacket (heavier than a towel), my judo pants, and my hooded sweatshirt into the washing machine and stepped into the shower. As I finished I started smelling that electrical burning smell, so I quickly rushed out of the shower and ran downstairs, thinking something was happening with the fireplace.

Nope, it was off, and no burning smell. I checked my fan upstairs, also off, along with lamp and clock-radio. That left the washing machine.

It had run for five minutes before shutting down and attempting to light itself on fire. Fortunately it was unsuccessful. Terrifyingly it didn't trip the breaker.

Now I have forty pounds of wet clothes and a washer full of water. I'll syphon it out tomorrow when I call my landlord and tell him I've broken another washing machine.

At the end of October I flew to Montreal, attended OOPSLA, and won a Beaver for finding the strangest thing on the internet as judged by Richard Gabriel (who is nerd-famous) which was ( Collapse ).

There was near silence throughout the video up until Cadillac turns into a bike. A moment of WTF? permeated the audience, and my victory was assured.

Buckminster the beaver is huge, bigger than four fat cats combined! Taking him back on the airport as my personal item was fun. I was offered $9000 for Buckminster, but I turned it down.

Then I worked for a week on my presentation, flew to Charlotte, NC for RubyConf and gave an awesome talk, or so people have told me. I did have a great Q&A section, though, so I'll believe it was awesome too. It was stressful, since I was spending too much time going over and over my talk, and not enough hanging out with other rubyists. Next year I'm not submitting a talk.

Now I have a PS3 because my PS2 is coughing itself to death. The PS3 purchase probably has the lowest $/excitement ratio of any purchase I have made to date. I can watch HD movies now care of Netflix now though, which is cool.

Oh, I also started my SUPER AWESOME job, but I can't tell you about it yet, its Top Secret.

I gave blood today, but I was supposed to give tomorrow. I suppose this kind of thing had to happen, considering they scheduled me for last week's Wednesday in Everett, and this week in Bellevue (Thursday, I suppose, even though I wanted Wednesday.)

I still haven't managed to break the five minute donation. This time was 5:40. After donation, my arm didn't want to stop. It sat there and tried to bleed for a good five minutes more before they got me an ice pack to chill my arm out.

I was reading about Link Light Rail on the Sound Transit website and found that the Operations and Maintenance building will have "a body shop with frame straightening equipment" and wondered how in the world they'd need one of those. (A frame straightener is a concrete slab with steel slots in it that you use to bend the train or large truck's frame straight again.) Surely the trains won't hit anything big enough to bend the frame!

Then I saw this video, I guess people are dumb enough to turn in front of the train often enough that eventually it would be out of true.

Also, there's a few Link Light Rail-related events! Tomorrow is the Downtown Transit Tunnel: Press Conference and Public Tours from 11:30 to 1:30 where you'll get to walk in the tunnels without a major emergency (or tresspassing). Thursday is the Beacon Hill Neighborhood Construction Meeting and Tour where you get to run around on the construction site. Monday Next week is the Downtown Transit Tunnel Street Fair and Celebration where the tunnel reopens!